I guess I've jumped on!  I got this Margarita Fragrant oil and I thought it would be great in Salt Soap.  Ever since I made it though it seems like everywhere I have looked, someone is making a Salt soap or talking about them.  Some love them, some don't.  I couldn't wait to try mine to see what all the fuss was about.  After some research I decided to make mine with 80% Coconut oil, 20% Castor oil, 75% Sea Salt and French Green Clay for colour.  I left it in a preheated oven for 4 hours before cutting.

Now the real test...... I tried it on my hands and liked the lather, it wasn't really big and fluffy, but it definitely had some.  We have soft water so that might help.  You think it would be a scratchy, exfoliating bar, but the salt just becomes smooth.
I think I like it!
Posted by Unknown at 9:45 PM 5 comments:

Seeing as how my Sincerely Vienna (lavender) has been flying off the shelves, I've been making a lot of it lately.  So when I poured my latest batch into the mold something seemed different, it didn't fill up the mold like it usually does, but of course I didn't think too much about it.  Until.....I was un-molding and cutting into bars.  It was much whiter then usually and it had an almost crumbly texture to it.  Normally when I cut the soap is still a little moist (I'm impatient) this was almost opposite to what I normally get.

I could snap the little end cuts in half!  Now I had a problem....I had NO IDEA what I had done wrong.  I knew it was lye heavy, my tongue is still tingling, completely forgot about those PH strips I have....Doh!!  I didn't want to have to throw it out, but I wasn't sure how I would go about rebatching it when I didn't know what I had left out.
So, after some hair-pulling and a little whining and crying on a soap forum....I figured out what I did wrong!  I had left out over 500 grams of olive oil!  How?  A little while ago my lovely husband made me a bigger mold and I in my infinite wisdom decided not to print out a new recipe but to just write the increased amounts beside my smaller recipe.  My recipes are printed with pounds, oz, and grams, but I only wrote down the oz.  But half-way through my recipe, while measuring the olive oil, I decided to switch from oz. to grams, because it is such a large amount.  I didn't even clue in that I was using less oil, grrrrrrr!
So, now I was a little bit frustrated but also happy because at least now I knew what had happened and I could rebatch with no problem.

There you have it, my little 'Soap Drama'.  Would you like to see the end result?.......not too bad after all. 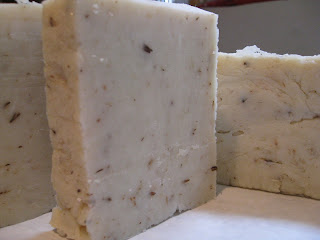